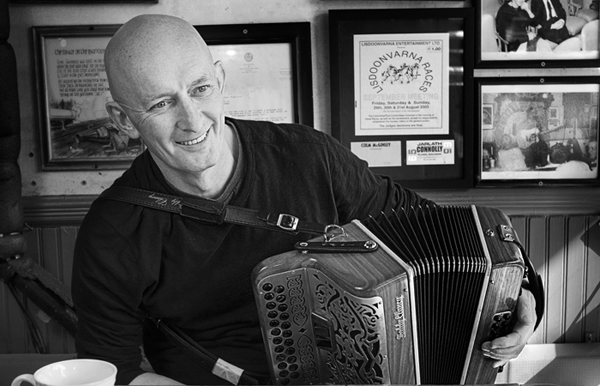 John Redmond grew up in the village of Ballindaggin, Co. Wexford, where he learned to play the box from Tom Dunne. He was an all-Ireland champion on button accordion before coming to America in 1988. His first CD, East to Northeast, reflected his personal and musical journey from Wexford to the Bronx.  The latest album, Box Sets, is a tribute to North Wexford, and to his love for his family who live there. The tunes, all his own compositions, echo his feelings for his childhood home near Mt. Leinster, and for some very special places in the US.

John has been the Traditional Irish-American Musician in Residence at Lehman College, and for many years has taught all levels of button accordion, and beginning concertina. He has performed for both the United Nations and the Mayor of New York City.

Whether leading a session or in concert, John is a rock solid player, his music a joyous waterfall that exhilarates both audience and players. Nowhere is this better illustrated than in Box Sets, his second album, sensational music that shines with extraordinary musicianship and luminous compositions.

This is a lovely album. Beautifully produced and featuring the very clean, bright style of John Redmond. Make no mistake, this guy can play the box. “Box Sets” is a stunner and a keeper!  Bill Margeson, LiveIreland.com, Chicago Irish American News

John Redmond has created a gorgeous collection of tunes – all original; all worth repeated play. Kristin McGowan, Irish America

The tempo of Redmond’s playing is never hurried and, more important, never barters vitality for mere virtuosity. His treatment of “Kanturk Polka/Many a Wild Night/Daybreak/Gan Ainm” is spot-on, each note cleanly executed and then strung together to form a sum larger than the parts… Earle Hitchner review of East to Northeast, The Irish Echo

BOX SETS is full of simply beautiful music – a stunning and evocative love letter to John’s friends and family, and to the world around him.  Daniel Neely, The Irish Echo

... his impeccable playing is only matched by his wonderful compositions. A remarkable feat.   Kevin Burke